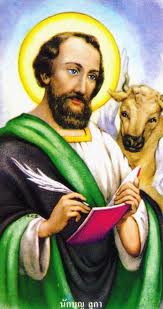 Holy Gospel of Jesus Christ according to Saint Luke 2:41-52.
“After three days they found him in the temple”
“I must be in my father’s house” 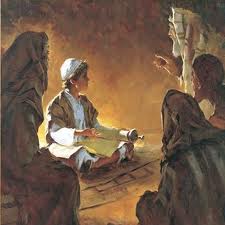 The child Jesus remained in Jerusalem

“Now his parents went to Jerusalem every year at the feast of the Passover.  And when he was twelve years old, they went up according to custom;  and when the feast was ended, as they were returning, the boy Jesus stayed behind in Jerusalem. His parents did not know it,  but supposing him to be in the company they went a day's journey, and they sought him among their kinsfolk and acquaintances;  and when they did not find him, they returned to Jerusalem, seeking him.  After three days they found him in the temple, sitting among the teachers, listening to them and asking them questions;  and all who heard him were amazed at his understanding and his answers.  And when they saw him they were astonished; and his mother said to him, "Son, why have you treated us so? Behold, your father and I have been looking for you anxiously."  And he said to them, "How is it that you sought me? Did you not know that I must be in my Father's house?"  And they did not understand the saying which he spoke to them.  And he went down with them and came to Nazareth, and was obedient to them; and his mother kept all these things in her heart.  And Jesus increased in wisdom and in stature, and in favour with God and man.”


Christian families should follow the example of the Holy Family, to transform their homes into a true school for prayer 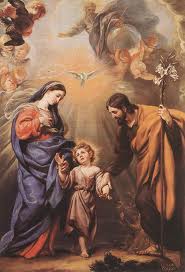 “Our continuing catechesis on prayer leads us, during this Christmas season, to reflect on the place of prayer in the life of the Holy Family of Nazareth. In the home of Jesus, Mary and Joseph, we learn to contemplate the mystery of God’s presence and to grow as faithful disciples of Christ. The Gospels present Mary as the supreme model of prayerful medition on the mysteries of Christ’s life; in praying the Rosary, in fact, we unite ourselves to her contemplation of those mysteries in faith and hope. Saint Joseph fulfilled his vocation as the father of the Holy Family by teaching Jesus the importance of quiet fidelity to work, prayer and observance of the precepts of the Law. Jesus’ unique relationship with his heavenly Father was reflected in the prayer life of the Holy Family and stands at the heart of all Christian prayer. May the example of the Holy Family inspire all Christian families to be schools of prayer, where parents and children alike come to know that closeness to God which we joyfully celebrate in these days of Christmas.”