The acceptance by Mary

﻿
The acceptance by Mary 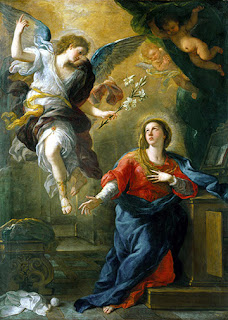 ‘Behold the handmaid of the Lord, be it unto me according to thy word,’ was Mary’s reply to the call of God through the Archangel Gabriel. The objective of the visit was not Mary but the Son of God who was to be born from Mary.

This was not the first visit made those days by the Archangel Gabriel. Six months before, the same archangel had gone to Jerusalem and not to Nazareth. He had not gone to an unknown city in Galilee, but to the political and religious capital. He had gone to a priest, belonging to the religious institutions and not to a simple young girl.
But this simple girl was poor in spirit and always open to God. She was an anawim, she was the Blissful, the Blessed One and the Lord’s favourite. In Mary, God found fertile ground. Because Mary was always open to God’s will. In fact, the evangelist St Luke tells us that the Lord’s angel appeared to Zachary but entered Mary’s abode. Zachary’s relationship with God was an external one linked to the commandments and the duties to God.
However Mary’s relationship with God was built on an interior communication. It was for this reason that the angel could enter her house. The Lord’s message was part of her life. Mary did not only listen to God’s word, but was always ready to do His will.
As Pope Paul VI tells as in the exhortation ‘Marialis Cultus,’ Mary is a model for every christian because she teaches us that The Word of God needs to be not only listened to but also accepted and communicated. The Word of God becomes the Good Tiding for us and can become part of us if, like Mary we interiorize it.
The Gospel becomes the Good Tiding if it leads us to obey God’s will. It is the faith in listening to the Word of God. Whoever listens to the Word, led by the Holy Spirit, just like Mary, becomes the servant of what he listens to. Luke represents Mary as the first one who listens to this Good Tiding of our salvation, accepts to become its servant and finally  ‘goes to the hill country with haste,’ to divulge it.
This is the disciple’s process. This is the way Luke presents Mary not only as the first disciple but also as the model disciple.
Father George Dalli – Swieqi, Malta