Cardinal Edwin F. O'Brien, grand master of the Equestrian Order of the Holy Sepulcher and Archbishop emeritus of Baltimore

Cardinal Edwin F. O'Brien, grand master of the Equestrian Order of the Holy Sepulcher and Archbishop emeritus of Baltimore 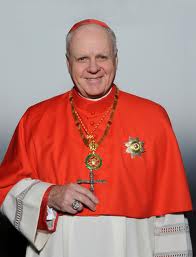 "My thoughts have been mainly with the Holy Father these days, and I think that's going to be the case until this whole episode is well behind us. It had to be a wrenching decision for him to make. The fact that he is certain he made the right decision – I am quite sure he is certain of that – still doesn't change the emotions. ... In one sense it will be easier for him, but in another sense it's going to be a very traumatic transition I think. ... I hope people understand the great contribution he has made, and will continue to make over the next two weeks and in his new life. Certainly that life will be no less dedicated to the Church and to Christ then it will have been during his years of active ministry as pope."
Posted by Unknown at 19:32