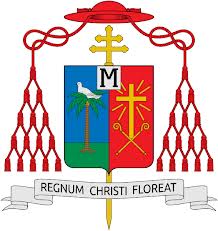 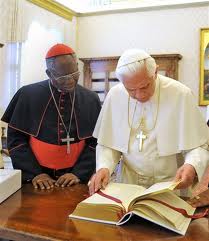 “We were there for a normal concistory meeting before the Pope canonizes new saints. He called all of us, cardinals, bishops, around and he asked us if we were going to vote in favour or not for these canonisations. We had the papers long before. And when we concluded that we were about to get the blessing, he said “Please sit down, I have something to say.” Something important for the Church. It was for us a surprise like thunder that gives no notice that it is coming.

As he moved on, from what he was saying, from his introduction, I began to fear that that’s what he wanted to come to. The cardinals started to look at one another. In silence, in surprise. But it was clear for what he had said. At the end there was silence.

Than the Cardinal-Dean got up and spoke. Obviously, he was hinted before because he had written what he said. Cardinal Sodano, and he said our mind: “We are surprised, we love you Holy Father, we are near you, we know you are doing this because for your love for the Church. And we will stand near you and we do our best for the Church.”

So it could have not been an idea he got the day before. If anybody is confused the problem is on the side of that person and not on the side of the Pope. Very clear on the side of Pope Benedict XVI. He said: “28th February 2013 at eight o’clock in the evening I shall resign from bishop of Rome and Successor of Saint Peter.”  The Church will have to find another one. And God is always there, the Holy Spirit does not go on Holidays. So, there will be another Pope, he will be elected. In two weeks or so. There is no danger that Pope Benedict will became a problem for that Pope, certainly not!

Perhaps if you were a politician who was removed by manoeuvres, perhaps the successor would be afraid. In this case not so. My hope and prayer is it will help many to get more mature in our faith. Our faith is not on the Pope, it is on Christ who is the foundation of the Church. Christ is the same yesterday, today and the same forever. We are all servants. We come and go. Christ does not come and go. He stays on! Without Christ the Church has no more meaning but the Pope is a servant indeed. One of his titles is servant of the Servants of God. He is not there for himself or for his self glory so his act yesterday was like saying “I am a servant. I think another servant should come on for the good of the Church!”

So this event will help all of us to be deeper in our faith, to be also let us say less sentimental. Sentiment is not a bad thing but people can overdo it. Some go to the area of liking, “I like, I like this one, I like this face, I like the style of this one.” All the Popes will not have the same face, all Popes will not have the same styles...Of course, Blessed John Paul II is not the same as Paul VI and Paul VI is not the same as Pius XII and is not as Blessed John XXIII. But all of them are successors of St Peter.

So my faith strengthens me in this Church. So this event can become for all of us strengthening and purification in our faith, very important. So Pope Benedict XVI may be teaching us many more important things than we realise.
Posted by Unknown at 05:34