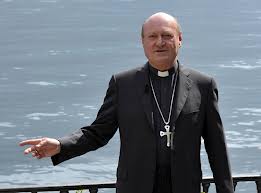 H.E. CARDINAL GIANFRANCO RAVASI
Since sunset Sunday, Pope Benedict XVI and the Roman Curia have been on their Lenten Retreat. Throughout the week, they are gathering in the Redemptoris Mater Chapel in the Apostolic Palace, for prayer and meditation, led this year by Cardinal Gianfranco Ravasi, President of the Pontifical Council for Culture. He has chosen as the overriding themes for his 17 separate meditations: "Ars orandi, ars credendi. The face of God and the face of man in the Psalm prayers”. 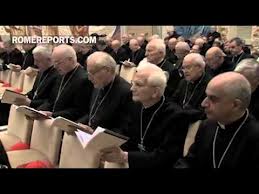 “To pray is to breathe, to think, to struggle, and to love God”. The natural act of praying was at the centre of the first meditation by Cardinal Ravasi Sunday evening. Greeting the Pope and his fellow prelates he began by addressing Benedict XVI’s impending resignation. He did so using biblical imagery to outline the future presence of Pope Benedict XVI within the Church, describing it as a contemplative presence, like that of Moses on the Mountain, who prayed for the people of Israel in the valley below as they battled with Amalek:

"This image represents his principal function for the Church, in short, intercession, he will intercede: we will remain in the 'valley', the valley where there is Amalek, where there is dust, where there are fears, even terrors and nightmares, but also hope, where he has been with us over these past eight years. From now on, however, we know that from mountain he is interceding for us".

He then called those present to a silence of the soul, inviting them to free themselves from the noise of everyday life ahead of the first meditation:

"I think for us these Exercises, these moments, are a little like freeing the soul from the dust of things, even from the dirt of sin, the sand of banalities, the nettles of gossip, which, especially in these days, ceaselessly fill our ears".

Monday morning’s meditation instead focused the Revelatory word of God and the Creative word. He began with the longest of the Psalms, Pslam 119, which he said invites us to listen to the divine Word present in the Bible. “In its verses we can hear the love for this Word which shines even in the darkness of existence”.

Cardinal Ravasi stressed the primacy of divine grace as the source that gives life to our prayer and faith. He said the word of God irradiates its splendour in the horizon of the conscience, melting our coldness and spreading light and hope. “Before creation in its richness, we can raise our thanksgiving to God for our existence and for so many marvels”.

“In the beginning there is the theophany, that gift of love which makes our hearts tremble in faith and moves our lips in prayer”. "What is the first face with which God presents Himself to man? The first revelation of God is the Word. His grace relies on the Word. It is interesting to note that the very opening words of the Old and New Testament is punctuated by the Word. God said, 'Let there be light and there was light.' Creation is therefore an event of sound, it's a Word, paradoxically the most human reality, an extremely fragile reality - because as soon as it is said it is gone- but at the same time it is particularly effective, because without words, communication wouldn’t exisit".

Within the Pslam, the Word is a light that breaks through darkness, especially in today's culture which is a “fluid, uncertain, horizon” where amorality is celebrated, [where there is] absolute indifference to the point that there is no longer any "distinction between bitter and sweet" and where everything is generically gray. Therefore, an encounter with the Word is essential, because it indicates to us the true scale of values, "often only standardized by things, money, power."

“The word of God irradiates its splendour in the horizon of the conscience, melting our coldness and spreading light and hope”.

Cardinal Ravasi then moved on to Psalm 23, which presents God as the shepherd leading His flock, and at the same time, our travelling companion. These elements, he said refer to the value of grace: truth on the one hand and love on the other. There is only one destination concluded Cardinal Ravasi, “the Temple, the table laid, the sacrifice of communion” therefore the celebration of the liturgy: “Faith is above all a gift, but it is also at the same time a conquest”.
The third meditation Monday morning focused on “the song of the twofold sun: the Creator God”, Psalm 19. Creation - highlighted Cardinal Ravasi - is "a different word of God," it "contains a silent theological music" he said, citing the German German Old Testament scholar Hermann Gunkel. It is "a message that knows no sound or echo, but which runs through the universe". Psalm 19 in fact reiterates that the astral spaces are "narrators" of the creative work of God:

"Contemporary man’s lack of wonder in is a sign of his superficiality. He is bent only on the work of his hands, unable to raise his eyes to the sky to admire in depth the two extremes of the universe and the microcosm. And devoid of contemplation, man has disfigured and exploited the earth. He no longer senses the earth as a sister”.

Part of the meditation was then dedicated to the dialogue between faith and science. Faith he said, responds to the whys’, science to the hows’. Blaise Pascal, according to Cardinal Ravasi, best synthesized the excesses to be avoided: "exclude reason, admit nothing but reason”. But at the same time the philosopher also indicated a way forward: " in speaking of human things, we say that it is necessary to know them before we can love them, while that it is necessary to love divine things in order to know them".

"You first must take the plunge into the sea of ​​faith - added Cardinal Ravasi - and then begin to navigate, understand and believe." Then path of prayer and theology are in no way “in opposition” rather they are "The harmony of the two paths” symbolically exalted in Psalm 19 with the dual sun: the star that shines in the sky and the Word of God as the sun:

"So the sun blazes in the sky and speaks of the cosmic revelation. But then there is the Word of God which is another sun, which enlightens us to the full. Revelatory word and creative word".