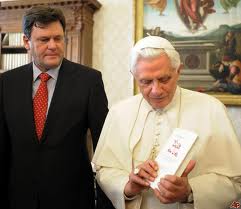 Peter Seewald, a German journalist who has collaborated with Pope Benedict XVI on book-length interviews, has said that the Pontiff’s health is worsening rapidly.

Seewald told the German magazine Focus that when he met privately with the Pontiff several weeks ago, he found him exhausted. The Pope is losing his hearing, Seewald says, and appears to be blind in one eye. He also said that the Pope has lost a great deal of weight, and new sets of vestments have been needed to fit his thin frame.