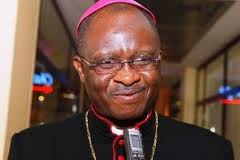 
“The news of the resignation did not surprise me. In the canon law there are conditions that allow a pope to resign. But on the other hand it is a surprise because nobody predicted it. Nobody expected the pope to resign at this precise moment. The still to be elected pope should be someone in dialogue with this century. I believe that when a new pope comes; I don’t see how he would allow homosexuality. He should be someone opened to the world but at the same time very jealous of the heritage of the church. We have a good number of African cardinals such as the Archbishops of Kinshasa, Abuja and so on that can become first black pope. Everything is possible.”
Posted by Unknown at 05:32