O'Brien and Mahony, two cardinals in the spotlight

O'Brien and Mahony, two cardinals in the spotlight 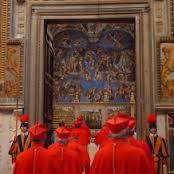 The british prelate, who should retire next month, has always been a strong critic of the gay movement, condemning homosexuality as immoral and gay marriage as "dangerous for the physical, mental and spiritual health of the people involved"

The Scottish case is added to that of the American Cardinal Roger Mahony, who yesterday in Los Angeles responded, under oath, for over three and a half hours to questions about his handling of the story of sexual abuse by priests against minors in the states.

"He was calm and in total control of the situation," as was reported today by the Los Angeles Times, Anthony De Marco, a lawyer representing a man who sued the Archdiocese of Los Angeles for the abuse allegedly suffered by a Mexican priest, Nicholas Aguilar Rivera, who visited his parish in 1987.

Mahony testified several times in the past, but yesterday’s cross-examination was the first occurred after the Archdiocese of Los Angeles - now led by Archbishop Jose Gomez, a bishop coming from the Prelature of Opus Dei - published on 31 January thousands of personal files relating to 122 priests accused of sexual harassment.

During the last days the pressure has thickened on Mahony not to attend the conclave - pressures reported yesterday by the harsh note of the Secretariat of State, which has set its sights on a large part of the media - but the cardinal has indicated that he is leaving for Rome. In addition to these cases there are those well known regarding the positions of Irish Cardinal Brady and Belgian Daneels, however, that - as it is - will participate in the election of the new Pope
Posted by Unknown at 12:46