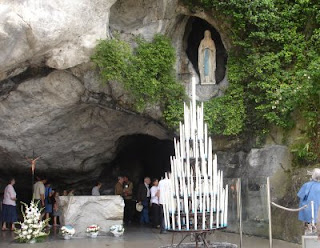 The Marian Shrine of Lourdes

More than 30,000 people are expected to attend the Shrine of Our Lady of Lourdes on Monday, on the 155 anniversary of the first apparition of the Virgin Mary to a young girl named Bernadette.

Organizers at Lourdes have spent the past few weeks preparing for the expected surge in pilgrims, over the course of the next few days.


According to tradition, the Virgin Mary first appeared to 14-year-old Bernadette in 1858 inside a Grotto. For a period of several weeks, 18 additional apparitions followed. Some years later the Church recognized the apparitions and the shrine was built.

Today, more than six million people visit the Sanctuary of Our Lady of Lourdes each year, making it the third most visited Marian shrine in Catholicism.

All the ceremonies will also be broadcast live through TV Lourdes, the sanctuary's internet television channel.

Source: Romereports
Posted by Unknown at 15:13