STATEMENT OF EDWARD CARDINAL EGAN ON RESIGNATION OF HOLY FATHER

IN THE HOLINESS OF TRUTH 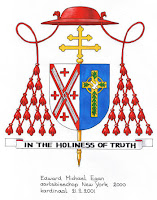 STATEMENT OF EDWARD CARDINAL EGAN ON RESIGNATION OF HOLY FATHER

The announcement by His Holiness, Pope Benedict XVI, that for reasons of advanced age he has decided to retire from his service as Supreme Pontiff is yet another proof of his total dedication to the Church of Our Lord and Savior, Jesus Christ. One of the most distinguished theologians of our time and a pastor of souls who has given himself to the People of God with unlimited commitment, he and his distinguished leadership will be sorely missed.

When I was consecrated a bishop, in Rome in 1985, the Holy Father, at that time Joseph Cardinal Ratzinger, kindly participated in the liturgy; and when I left Rome to travel to New York two months later, he returned to the Eternal City from a spiritual retreat to wish me well and assure me of his prayers. Thus it is that I have just written him a warm, filial, letter to profess my unlimited loyalty and promise to keep him in my Masses and prayers throughout the years that lie ahead.