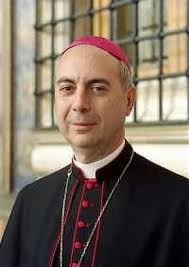 The Vatican’s top foreign-policy official has questioned the UN’s approach to human rights, in a speech at UN headquarters in Geneva.
Archbishop Dominique Mamberti, the Vatican’s Secretary for Relations with States, said that “the introduction of ambiguous expressions and ideological positions appear to ignore the solid foundations of human rights, to weaken the successes already achieved, and to undermine the universality of human rights.” He said that the UN’s discovery of “new rights” undermines the existing principles set forth in the Universal Declaration of Human Rights.
“A fundamental question ought always to be present in our minds,” Archbishop Mamberti said: “Are human rights universal because a majority of countries recognizes them, or are they universal because of an ethical claim which is prior to their recognition by states and which comes from the dignity of every person?” He continued:
The Holy See firmly believes that human rights should be judged by their reference to the founding principles and objectives enshrined in the basic documents where the nature and innate dignity of the human person are key elements. In his 2009 encyclical Letter Caritas in Veritate, Pope Benedict XVI rightly observed: “A link has often been noted between claims to a ‘right to excess,’; and even to transgression and vice, within affluent societies, and the lack of food, drinkable water, basic instruction and elementary health care in areas of the underdeveloped world and on the outskirts of large metropolitan centers. The link consists in this: individual rights, when detached from a framework of duties which grants them their full meaning, can run wild, leading to an escalation of demands which is effectively unlimited and indiscriminate.