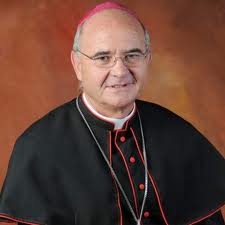 Dear Brothers and Sisters in Christ,

Catholics throughout the world have been taken by surprise by the resignation of Pope Benedict XVI, which was announced yesterday. Most have been saddened by this announcement because we recognize and acknowledge the courage of Pope Benedict during his almost 8 years of the Pontificate. His has not been an easy Papacy due to the many difficult issues that he has had to deal with over these years, not least the scandal of sexual abuse of minors by clergy. He has been under an enormous amount of pressure from various groups, such as those, which advocate for the ordination of women and those, which promote gay marriages.

In these difficult times he has stood from and re-affirmed Catholic teaching. In some quarters this has not made him popular and he has had to endure inordinate criticism. But his fidelity to Christ's teaching has made him a true Shepherd and a true Teacher of the faith and in this he has inspired and strengthened his brothers and sisters in the service of Jesus Christ. He has greatly enriched the Church with his theology and writings. His clear mind and deep thought have made a positive contribution to the life of the Church. He reached out to victims of abuse and, on behalf of the Church, sought their forgiveness. His encyclicals taught us on the love of God, on the need to seek justice in the economy and to strive for a new economic order, his post-synodal document Africae Munus called on all Africans to be in the service  of  justice,  peace  and  reconciliation.  He  has  deepened  relationships  with  leaders  of  Christian denominations, those of other Faiths and political leaders – a fact which has been acknowledged by many world leaders over the past twenty-four hours.

Pope Benedict's decision to resign is a humble act based on his recognition of his failing physical help and the need for the Church to have a Pope who has strength both in body and mind. It is quite clear that this difficult and agonizing decision has been made for the good and the love of the Church. We respect and acknowledge his humility and his willingness to make sacrifices for the greater good of the People of God. It is certainly not the first time we have witnessed the humility, gentleness and love of this great man. We have only to think of occasions such as his visit to the United Kingdom to be reminded of how he touched and changed the lives of many people.

While we may be saddened by his resignation we do recognize that the Pope, after frequent examination of conscience, believes that this is the right course of action at this time in the life of the Church. We respect that and we, as Catholics, must continue to pray for Pope Benedict that he will continue to give service to Christ and his Church in a new way. I call upon you all to pray for him daily that the Lord may continue to strengthen and protect him.

Furthermore, we know that God never deserts his flock. The Lord will not desert us at this time and we too need to strengthen our faith and trust in God's continued salvific action in the world today. As we enter this new phase of the life of the Church, I call upon all to pray daily in your private prayers, during the Celebration of the Eucharist and in other liturgical events, to pray that the Holy Spirit will guide and lead those who are entrusted with the responsibility of selecting a successor to Pope Benedict. As we enter this time of Lent it is most appropriate to strengthen our prayer and fasting that God's will be done and that the right person will be elected Pope to lead us through the times that lie ahead.

May God bless you and your families and always keep you true to Him.

Yours in Jesus Christ,