H.E. CARD. JOSE SARAIVA MARTINS, C.M.F.Prefect Emeritus of the Congregation for the Causes of Saints
Cardinal-Bishop of the Suburbicarian Church of Palestrina 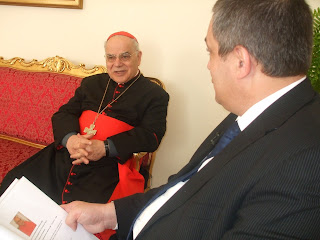 Even though the news was unexpected the Cardinal says that Paul VI and even John Paul II also considered the possibility of stepping down.

“When I received the news I was very serene, very calm. It's quite clear that he made the decision freely. He even explained the reasons why he came to this conclusion, so it wasn't something spontaneous. He simply recognized that in the last few months, his physical energy had diminished. He decided that the best thing to do for the Church was to resign.

If we take a look at his predecessors, they also considered leaving office. Paul VI thought about it and even created a commission of Canon Law experts, to study the possibility. They advised him not to, because they thought a resignation could  have a psychological effect on his successor and vice versa.  John Paul II also thought about stepping down, but he was advised not to and he didn't.

The idea of having a Pope resign isn't new.  Benedict XVI's predecessors decided not to resign, because they thought it wasn't the best thing for the Church at that time. But Canon Law does allow it.”
Posted by Unknown at 20:42