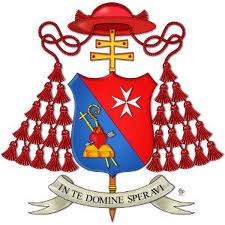 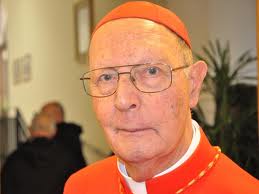 The Holy See Press Office has announced that Cardinal Prosper Grech, an 87-year-old biblical scholar whom Pope Benedict created a cardinal in 2012, will preach a meditation to the cardinal electors on the afternoon of March 12, after the conclave has begun but before the first vote is taken to elect the next Pope.
Universi Dominici Gregis, Blessed John Paul II’s 1996 apostolic constitution on the vacancy of the Apostolic See and election of the Roman Pontiff, directs that the cardinals, in their pre-conclave congregations,

shall entrust to two ecclesiastics known for their sound doctrine, wisdom and moral authority the task of presenting to the Cardinals two well-prepared meditations on the problems facing the Church at the time and on the need for careful discernment in choosing the new Pope.

Father Raniero Cantalamessa, the 78-year-old Capuchin Franciscan friar who has served as Preacher to the Papal Household since 1980, preached the first meditation during the second general congregation of the cardinals on March 4. Universi Dominici Gregis states that on the opening day of the conclave, “when the last of the Cardinal electors has taken the oath,”
the Master of Papal Liturgical Celebrations will give the order Extra omnes, and all those not taking part in the Conclave must leave the Sistine Chapel. The only ones to remain in the Chapel are the Master of Papal Liturgical Celebrations and the ecclesiastic previously chosen to preach to the Cardinal electors the second meditation, concerning the grave duty incumbent on them and thus on the need to act with right intention for the good of the Universal Church, solum Deum prae oculis habentes [considering before their eyes God alone].

Born in Malta in 1925 and ordained a priest of the Order of Saint Augustine in 1950, Father Grech helped found the Augustinianum Institute for Patristic Studies. The professor of biblical theology at the Pontifical Lateran University has served as a consultor to the Congregation for the Doctrine of the Faith, apostolic visitator of seminaries in India, a member of the Pontifical Theological Academy, and a member of the Pontifical Biblical Commission.
“I think it’s prayer, and certainly not hermeneutics, that is the keystone of the Christian life,” he said in a 2012 interview. “We need to come down off our pedestals, empty ourselves of intellectualism and pride. We need much humility, we need to recite the Rosary and the simplest prayers, like those of popular devotion; one understands there how it is very often the people who hand on faith to the learned.”